A certain photo of me has been following me around for some time. 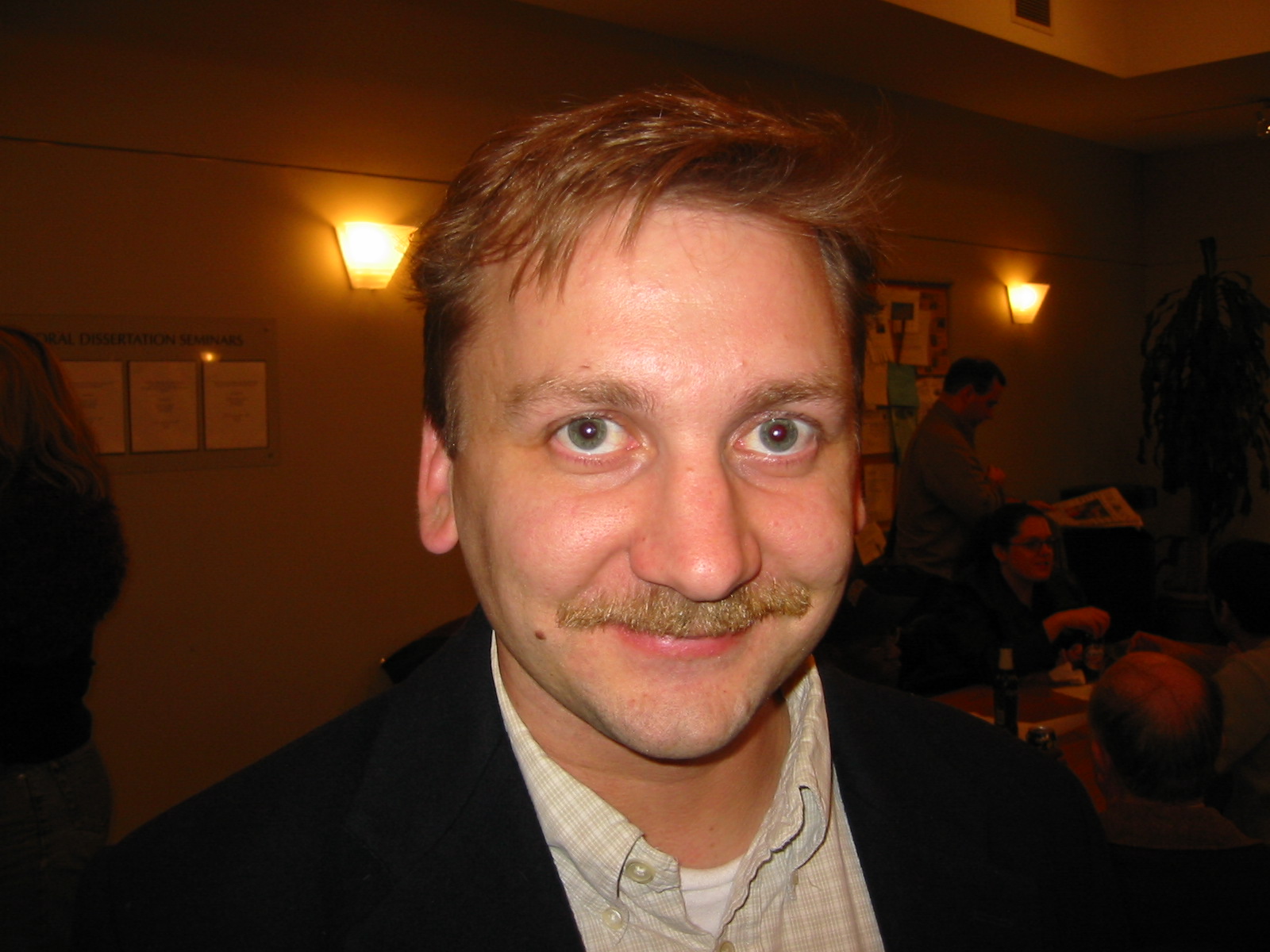 The thing is sitting on my website, so I suppose I have only myself to blame. I actually quite like the photo. I look happy. I was happy. I’m not always happy.

It’s shown up in a lot of talks, particularly by a certain friend of mine.

It appeared on the seminar board at Hopkins Biostat earlier this month. Perhaps it’s still there. (My own innocent comments prompt some of this.)

It seems time to tell the story behind the photo. This will probably be longer than it should be. But I’ve included photos of cats.

I think November, 2002, was the first time that a group of young Hopkins Biostat faculty participated in the Movember Campaign, in which guys shave and then grow a mustache (or moustache) for a month.

For various reasons, I didn’t actually participate. Among the least important: I had a Van Dyke at the time. It probably took me a couple of months to grow the thing, so damned if I was going to shave it off. 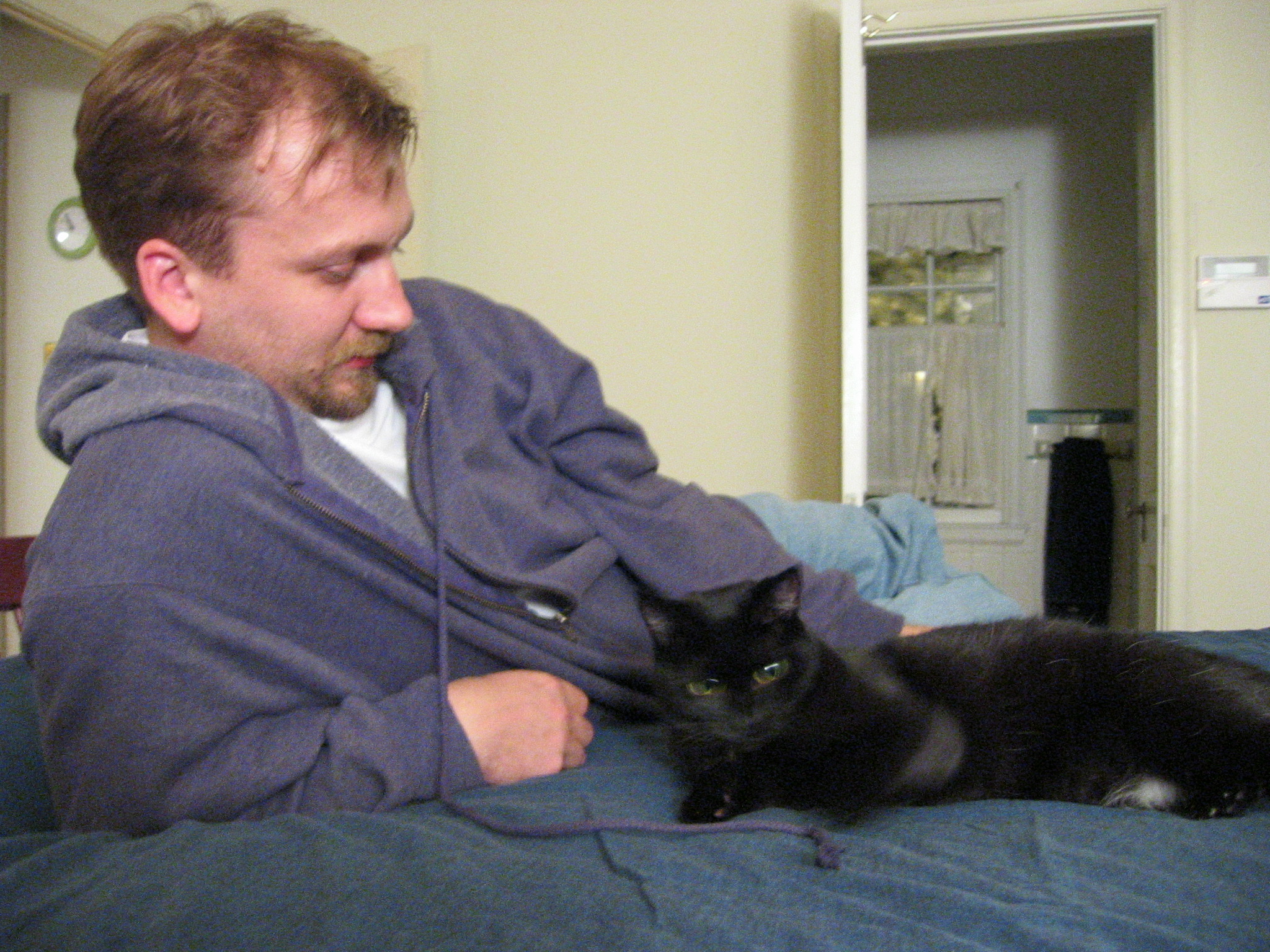 (There was a big controversy during the competition. Rafa was growing an impressive handlebar mustache, but it was revealed that on weekends or when traveling, he’d grow out the bit on his chin, so that it wouldn’t be a proper mustache anymore. I believe he was disqualified.)

Now, I thought the whole Movember thing went from Nov 1 to Nov 30. But this photo was taken 15 Nov 2002, and I recall that it was the last day of this Hopkins Biostat competition. Actually, if you look at the history of Movember, it seems that they started in 2003, so the Hopkins guys were ahead of their time. (And surely it was Brian who was responsible for this? As I recall, he was trying to introduce some Florida traditions, and mud bogging was viewed to be infeasible.) So maybe we went from Oct 15 to Nov 15?

Anyway, it was the morning of 15 Nov 2002, and I had a bit of an accident with my beard trimmer – I forgot to use the guard or some such. And so I shaved off a big patch of the beard part. Well, it was the last day of the mustache competition, so I figured what the heck, I’ll shave it all off, except for the mustache. I think I was made an honorary participant.

Biochemistry graduate students organize a Happy Hour every Friday at the Johns Hopkins Bloomberg School of Public Health. The Biostat Faculty were enthusiastic participants. (As you may recall, Happy Hour was featured in the whole JHSPH logo saga; see parts one, two, and three).

The photo was taken at Happy Hour. So that’s why I was happy. (There exists a dual photo of John McGready, who was a true participant in the competition. But, as I recall, it’s hard to detect the presence of a mustache in the photo of John, so it’s not gotten the same play.)

You may ask, “But why were you wearing a proper shirt and a sport coat? This was long after that incident with the Dean, where you were subsequently required to wear a proper shirt on a daily basis.”

Well, my wife worked at the Wilmer Eye Institute, and we were going straight from Happy Hour to dinner with a group of her colleagues. I think it was in honor of some important visitor.

Why bring this up? Well, at the dinner, I was sitting next to Oliver Shein, and for reasons that I suspect you can infer quite well yourself, I was unusually exuberant, and I was telling him about the mustache competition. He asked me, “Is there a prize for the winner?” And I responded, “A really bad mustache!”

It was then that I realized the Oliver Shein is a mustache guy. Oops.

It seems like people think I was a mustache guy myself, from that photo. But it actually lasted just the one day. 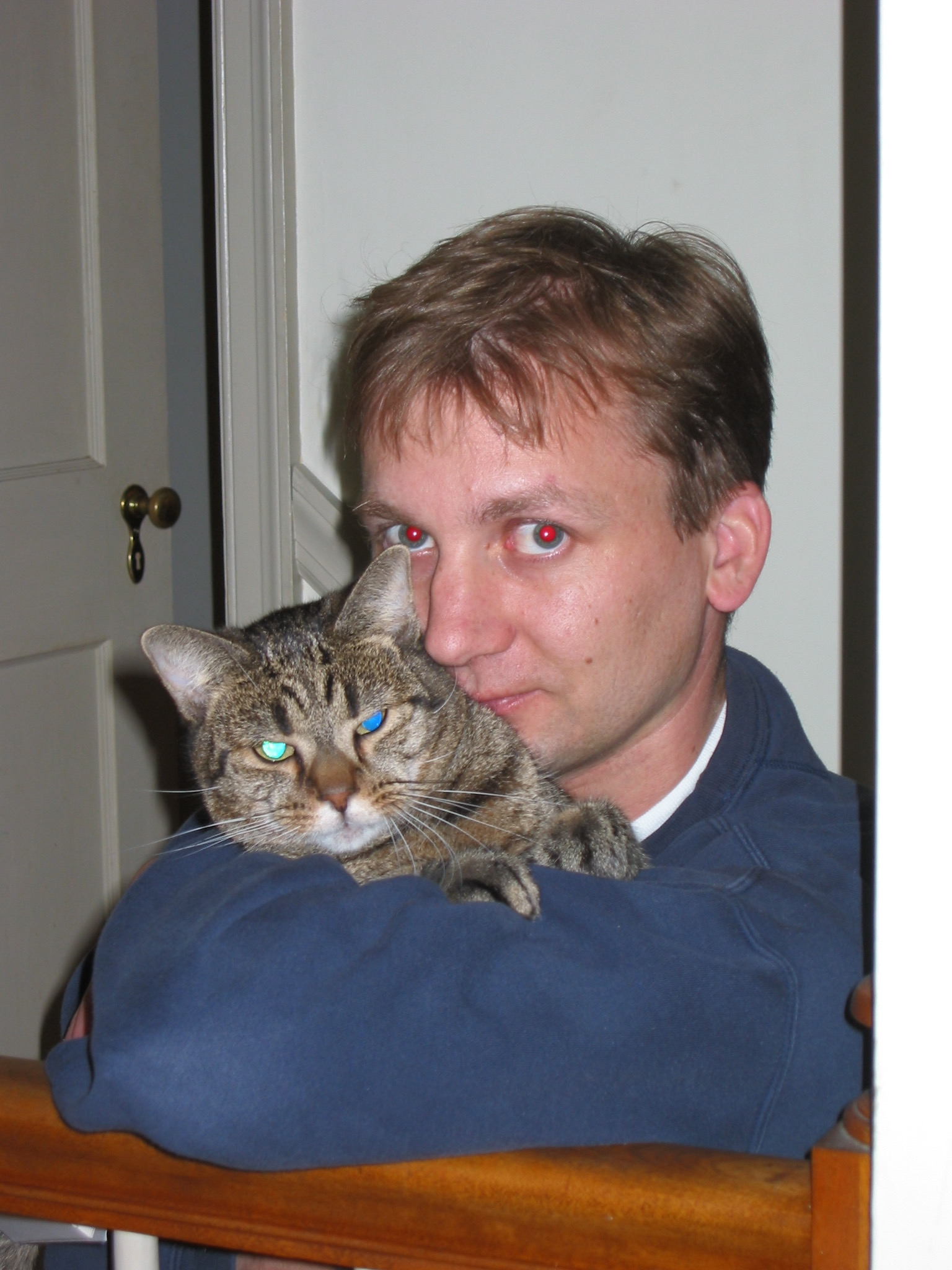 What’s really shocking about the photo

I’m not sure why my Hopkins friends are so fascinated by the photo. Possible explanations include

I’m just glad to have people thinking of me, even if I’m not entire sure what they’re thinking.